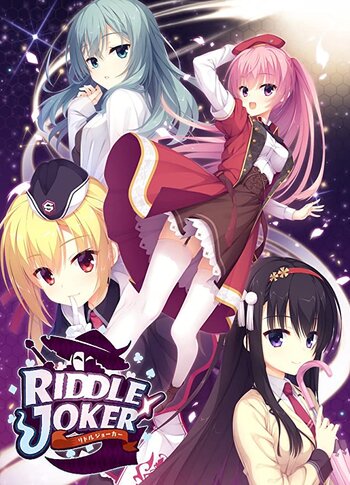 The main heroines, clockwise from the top-left: Mayu, Ayase, Hazuki, and Nanami
For decades, superpowers and psychic abilities were thought to be mere science fiction, but the discovery of a certain particle called the "Astron" at the end of the 20th century proved to the world that these wondrous phenomena were real. Nowadays, these abilities have been dubbed "astral abilities," with those who can wield them being knows as "Astrals."
Advertisement:

Arihara Satoru is but an ordinary person living in this futuristic world.

However, beneath that guise, he's actually a secret agent working for an organization that uses Astrals.

One day, he receives a new mission:

Pose as a student and infiltrate a famous academy for Astrals.

After successfully transferring into the academy together with his sister Arihara Nanami, he settles into his new life there, meeting new friends like his classmates Mitsukasa Ayase and Nijouin Hazuki, and his upperclassman Shikibe Mayu, among others.

Until an unfortunate accident leads to Mitsukasa Ayase finding out his true identity! And in that situation, he also learns that she has her own big secret...

Riddle Joker is Visual Novel published on April 27th 2018 by Yuzusoft, the same company behind Dracu-Riot!, Sabbat of the Witch and Senren Banka. An English version was released on Steam by Nekonyan on December 18th 2020.