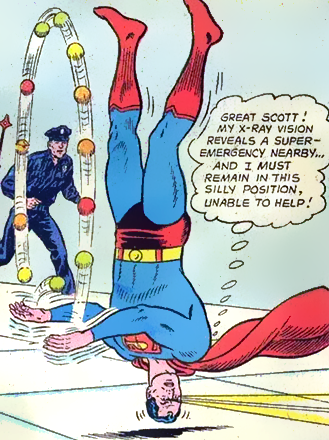 What happens when one holds a dozen of this trope at once.
"Now you see that Evil will always triumph, because Good is dumb."
— Dark Helmet, Spaceballs
Advertisement:

Why do heroes always act like idiots, even when not Idiot Heroes? They always make the worst decisions when the time comes. Sure The Good Guys Always Win and end up Saving the World from the Big Bad, but they seem to have an aversion to making smart choices while doing it.

This is the hero-specific form of the Idiot Ball, which causes its holder to make downright moronic decisions solely because the plot demands it. Unlike the Villain Ball, the Hero Ball almost never leads to its holder's permanent defeat; it merely delays the hero's inevitable victory, ratcheting up the dramatic tension in the meantime (at least, until the Fridge Logic kicks in). Of course, once victory is assured, the Hero Ball will prevent its holder from killing or permanently incapacitating the villain — after all, the villain needs to be back on his feet in time for the next episode.

If he carries the Hero Ball long enough, one almost gets the impression that the hero is more interested in padding the plot than in actually defeating the Big Bad. This can be particularly frustrating when we've been shown (or at least told) that the hero should be smarter than this.

Note that some of these tropes are mutually contradictory; for example, a Lawful Stupid character carries the Hero Ball all the time, but would sooner die than Save the Villain. Apparently, there's only so many ways to be smart, but idiocy is Legion.

Modern, Western action movies usually combine the Hero Ball with some form of Karmic Death. The hero can't actually be shown executing the villain, but that doesn't mean the villain can't fall to his death, be eaten by his own monster, crushed by his own machine, fall into nearby acid or lava, or impale himself on some nearby sharp object, or be otherwise Hoist by His Own Petard.

Compare with the Villain Ball and Holding Back the Phlebotinum. Contrast Flaw Exploitation for when an antagonist exploits a heroes' flaws. Contrast No-Nonsense Nemesis, who isn't prone to carrying the Villain Ball, and Good Is Not Dumb.