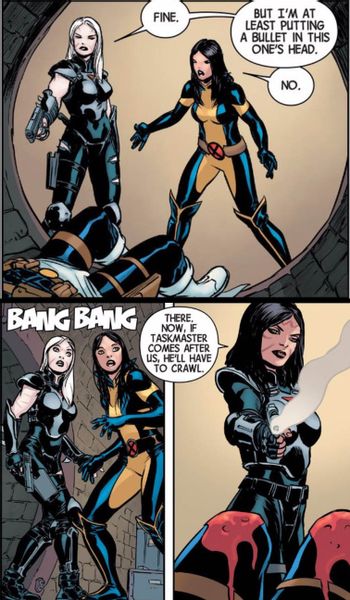 If you live in an action-adventure universe, violence is one of those things that you just can't escape. (After all, you cannot spell pacifist without a fist.) This can be a real problem if you want your lead character to be a new-agey tree-hugging intellectual, because after Hunter S. Thompson died in 2005, how many gun-toting hippies do you know?

Unlike the principle of Thou Shalt Not Kill, the Technical Pacifist is certainly capable of making the killing strike if there was no other way, but they don't ever treat it lightly. In a certain variation they may be perfectly fine with the Self-Disposing Villain who is Too Dumb to Live being defeated because of their own Villain Ball or being hoist by their own petard; so long as they don't personally pull the trigger or push them off the building, everything is fine. A Murder by Inaction may also be fine. It's all fine as long as they don't do the killing themselves.

Sometimes, a Technical Pacifist may have an aversion to certain weapons due to their lethality (most often guns), preferring to fight with their fists and other blunt weapons that are less likely to kill someone. Other times, they employ swords or even bullets in ways designed to subdue their opponents in a non-lethal manner. Not only that but most other rules regarding Thou Shalt Not Kill are usually thrown out the window in the case of dealing with aliens, robots, zombies and/or monsters. Just as Beware the Nice Ones is for the Actual Pacifist, Good Is Not Soft is not an unusual trait for this character.

There is a villainous variant of the Technical Pacifist, often seen with the Corrupt Corporate Executive and the Worthy Opponent. In the former case, this is a villain who has no qualms about killing people, but doesn't like to get their hands dirty (or at least to be seen getting their hands dirty). So they have someone else do it instead. This invariably leads to the hero being locked in an Easily Escapable Deathtrap so that the villain won't get bloodstains on their suit. This tends to drop away when they're backed into a corner. In the latter case, the Worthy Opponent just refuses to use a gun because it's "not fair".

The Willing Suspension of Disbelief can be stretched in certain cases. Blunt weapons can still kill people, after all.

Contrast Actual Pacifist for somebody who genuinely doesn't hurt people, instead of hurting them less, and Reckless Pacifist for someone who refuses to kill, ever, but comes frighteningly close to doing so. Also contrast What Measure Is a Mook?, for the surprisingly common situation where the hero has qualms about killing the main villain at the end of the story after spending most of the plot casually blowing away the villain's minions. Compare Reluctant Warrior, who despite not wanting to fight, does fight and kills, much to their own regret. Compare and contrast Badass Pacifist, who is capable of completely defeating their opponents using only nonviolent tactics.