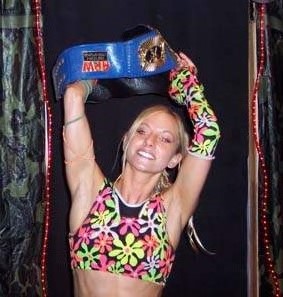 Daizee Haze (real name Emily Sharp, born May 11, 1983) is a retired American Professional Wrestler, manager/valet and trainer from Cape Girardeau, MO best known for her work with Ring of Honor, CHIKARA and SHIMMER. She debuted in 2002 in Gateway Championship Wrestling after training under Delirious, who had already debuted alongside MsChif. Haze worked for IWA Mid-South before debuting in ROH in 2004, and she would work there on-and-off until 2011. Among her in-ring accomplishments, she is a former 2x IWA Mid-South Women's Champion

with Tomoka Nakagawa. She has also competed for Wrestlicious, TNA and many independent promotions. She retired in 2011 due to what was later revealed to be anorexia, but still makes very occasional appearances in various promotions.