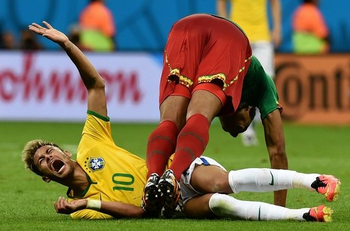 Combat choreography is often done using explicit and implicit cooperation by all involved to minimize injuries while doing maneuvers that remain extremely dangerous. To help maintain the Willing Suspension of Disbelief, the person at the receiving end of the dangerous maneuver must appear to show that the move hurt. This is the Theatrics of Pain.

When a wrestler pretends to be uninjured by the move, this is the No-Sell. When an actor does, it is The Stoic or Made of Iron.

Sometimes, wrestlers will hit too hard. This is called "stiffness". Usually, it's harder to show any level of pain other than the true level, making them difficult to work with. That can happen in film and TV, too; we are less likely to see it there, however, because of the magic of editing.

A common place to find unscripted Theatrics of Pain is in Association Football. As the game allows tackling for the ball but penalises reckless or deliberately injurious tackles, it's in an unscrupulous player's interest to sell any physical contact whatsoever as theatrically as the referee can be expected to believe, often including crashing to the ground and rolling around wearing a grimace of agony. Such "diving" is stereotypically associated with Latin American/South European styles of play, but can in truth be found all over the world. Some fans are of the opinion that the game should adopt a rule of "If you're not bleeding profusely, or can still play, you don't deserve the foul", but the sporting gods hold that it's important to deter unsportsmanlike behaviour like intimidation, reckless tackles and shirt-grabbing (plus, multimillion-dollar-losing broken ankles are as terrifying to owners of football clubs as those of racehorses.) For the polar opposite of the stereotypical Fragile Speedster footballer, see Rugby Is Slaughter.

Compare to Reality Is Unrealistic.

open/close all folders
Anime and Manga
Comic Books
Films — Live-Action
Live Action TV
Pro Wrestling
Wrestling has the most literal version; the theatrics of pain is called "selling" in that medium. Many wrestlers find themselves praised or derided based on their ability (or lack thereof) to sell an opponent's attacks. See also Wrestling Psychology.
Sports
Theater
Video Games
Western Animation