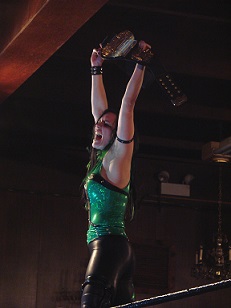 Rachel Collins is an American Professional Wrestler from Missouri whom fans know as MsChif. Trained by Johnny Greenpeace and Jack Adonis, she debuted on June 19th 2001 in Hillsboro Missouri for Gateway Championship Wrestling managing Delirious and later defeated the undefeated Christine. Diabolic Khaos made its tag team debut next month at the DeSoto Wrestlefest (where she and Delirious defeated Matt Sydal and Christine) and MsChif quickly caught on after appearing on Gateway's 36th televised episode, going on an undefeated streak of her own that saw her usually defeating MEN. This ended when MsChif failed to defeat Light Heavyweight Champion Billy McNeil and got in a prolonged feud with Johnny Greenpeace. She later switched to IWA Mid-South and NWA Midwest, before becoming a regular in SHIMMER. She has competed for Ring of Honor, various other NWA territories and a variety of promotions in the USA, Japan, Canada and England. Among her in-ring achievements, she is a GCW Light Heavyweight Champion, a Coastal Wrestling Association Tag Team Championnote with Cindy Rogers, a SHIMMER Champion, a 2x NWA World Women's Champion