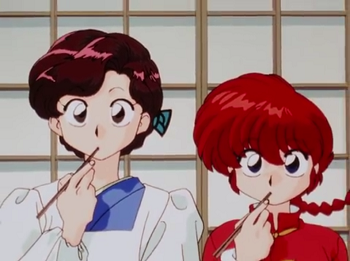 Like mother, like...son.
"What do we do to people we don't like? We punch them! This is...the perfect punching angle! ORAORAORAORA ORA!"
— Jotaro Kujo and his daughter Jolyne, JoJo's Bizarre Adventure: Eyes of Heaven
Advertisement:

Appearance isn't the only thing that family members can share. Much of the time, family members tend to act similarly, either by having similar habits, taking similar actions when faced with similar decisions, or otherwise having certain quirks indicative of the family. While their overall personalities can be entirely different, individual habits can still be shared between them.

Truth in Television, because children tend to be influenced by their parents and may try to imitate them, so it’s not uncommon to see a child share a few habits and quirks with their parents. This has the scientific justification of learned behavior in immediate families, since a young, impressionable child is very likely to be watching when a parent or sibling is doing something, so the child will likely imitate that behavior.

In several works, this can actually be foreshadowing a reveal that two characters are related when certain habits are shared between them.

Lucretia and Her Mother

Lucretia and her mother can both dribble five balls at once.

Lucretia and Her Mother

Lucretia and her mother can both dribble five balls at once.