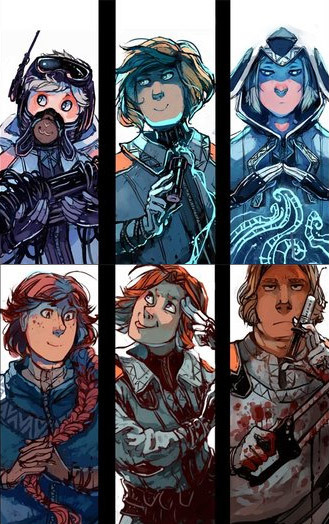 This adventure requires you to be tough and they most certainly are!
"The First Rule for survival outside of the safe areas: If you come across a Beast, a Troll or a Giant, do not run or call for help but stand still and stay silent. It might go away."
— Stand Still, Stay Silent

Ninety years ago, a mysterious illness called the Rash caught humanity by surprise. Those that it didn't kill, it changed into monsters of infinite lifespan capable of infecting the still-healthy. The biggest bastion of survivors is now Iceland, while small and scarce settlements can be found in Norway, Sweden, Denmark and Finland. The land separating those few refuges of humanity from each other, and the entire rest of the planet as far as anyone is concerned, has become a Plague Zombie ridden Death World known as the Silent World. Armies of the remaining nations are now entirely dedicated to fighting off the threats from the Silent World and reclaiming it one small piece at a time. In some countries, their ranks include mages. Cats, meanwhile, have turned out to be the only mammals whose entire population is immune to the Rash and able to detect the presence of those that have been transformed by it.

The first initiative to explore the Silent World, an operation that most consider an inherent Suicide Mission, ends up getting funding only because of a misunderstood application that gets its organizers mistaken for asking for much less budget than they actually are. In the process of Cutting Corners to account for the scarcer than planned funds, they give up on hiring a properly qualified crew, and instead build a Ragtag Bunch of Misfits out of a mixed bag of relatives and acquaintances who only technically have the right job titles. The story follows the resulting exploration team as they travel in the territory Denmark lost to the Zombie Apocalypse.

The comic, which can be found here

, currently consists of two Adventures (I and II), between which both the chapter and page numbers are reset.

The webcomic is set in a post-apocalyptic world, and is by the same artist who drew A Redtail's Dream. It's described as an "adventure story with some humor, some horror and lots of friendship". It used to be updated five days a week at midnight Monday-Friday. Starting November 2016, the time formerly used to prepare the Wednesday update was dedicated to developing a science-fiction video game called City of Hunger in which the Player Party was made of Expies of the comic's cast that ran on the Unity engine and whose development can be found here

. The publication pace was also temporarily slowed down in late 2020 and early 2021 for the purpose of producing Lovely People. Announcements made soon after the latter's publication included halting the production of City of Hunger.

Stand Still, Stay Silent was ended in 2022, as the author wished to move on to other projects.