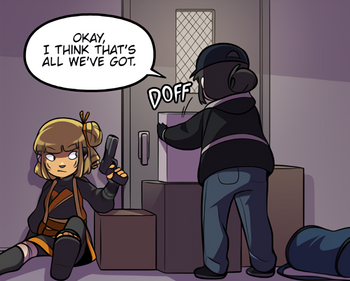 ...Wait, hold up. Doesn't this door... open both ways...?
Not to mention, once you hassle the horde,
It doesn't matter how much furniture you stack at the door!
—Aesop Rock, "Jumping Coffin"
Advertisement:

There's a bad guy coming after you. You just locked the door between them and you. Sometimes, you just don't have wooden boards, nails, and a hammer handy, so what's a victim to do? Well, use the furniture, of course.

A lot of the stuff in a living room is heavy, so it stands that they can effectively keep the door from moving when pinned against the door.

One of the most common variants of this trope is to jam a chair underneath a door handle to keep it from turning. This is also useful when you're trying to prevent someone from leaving a room.