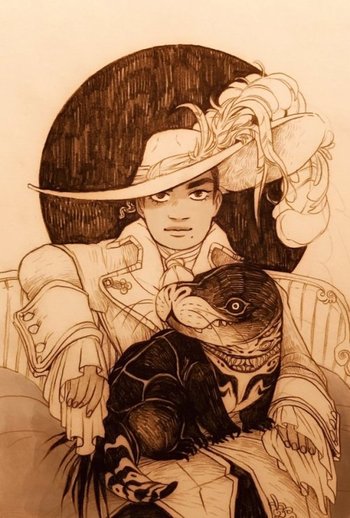 After half a year at sea, Lord Remy Bonnaire has returned to Lucentia in the company of his friend and first mate, Lord Jamis Arlesi. His sister — and Jamis' fiancee — Lady Ludovica awaits them. Ludovica has other plans for the reunion, however. Through a convoluted plan of her own design, she manages to leave the Bonnaire Estate with her fiance, taking her brother's ship and clothes and his very identity with her. Ludovica hopes to find love and adventure, and to write a book about her favourite subject: the fascinating life cycle of sea sponges!
Advertisement:

is a Swashbuckler Adventure webcomic (with elements of fantasy and romance) by Petra Erika Nordlund (Prague Race), hosted on Hiveworks. The comic started in March 2018, and Nordlund completed the first book in June 2020. According to Nordlund, the comic is planned to be three books long.