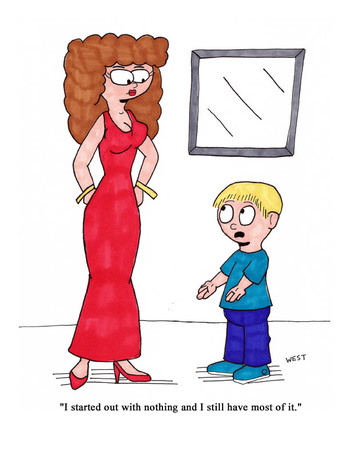 Tiffany and Corey is a gag-per-day webcomic by Max West that launched on June 13, 2017 with updates twice a week on Tuesday and Friday.

Emphasizing humor, the webcomic is a series of gag cartoons starring Tiffany, a beautiful brunette woman in a low-cut red dress, and Corey, a little boy. A third character, a blonde woman named Alessandra, was added on November 14, 2017. Corey got a pet, a cat named Pepperoni, on April 3, 2018. These four are the main characters with the latter two being more of a supporting role.

The series relies on a mix of puns, sight gags and observational humor. Most entries are single-panel cartoons done in black & white but occasional color cartoons and multi-panel comics are featured.