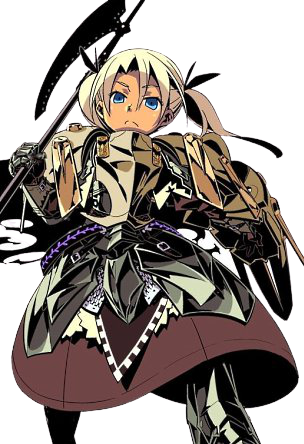 Who says walking tanks can't be elegant?
"My slinky sorceress' robe will have a chain mail foundation garment, at minimum."
— Rule #7 on the Evil Empress Guide

A dress that is lightly to heavily armored, and thus would fit in both a social gala and an epic melee. The form of the dress can range from a frilly gown and petticoats also accessorized with armor and/or weapons, to basically a suit of armor with a skirt.

The point of this dress is a combination of Rule of Glamorous and Rule of Cool, as such an outfit will almost always be Impossibly Cool Clothes. In fact, skirts of armor such as mail or segmented plate were historically used (and mostly for men at that) as it was an easier way to protect the hips, buttocks, groin, and upper legs without restricting one's range of movement. The main differences from the examples in this article are that undivided skirts didn't often extend past the knees — at a certain point you'd need splits in front and back in order to mount a horse — and they would have avoided adding too much heavy fabric or low hems that could snag on the ground or trip up the feet.

Naturally the ladies wearing these kinds of dresses are almost always Action Girls, particularly Ladies Of War, Pretty Princess Powerhouses, or other tropes related to Silk Hiding Steel (although this trope makes the "hiding" moot). If any other girl ends up wearing this, expect her to fall over almost immediately, if she can even move.

Remember that this is an armored dress, not simply a fancy dress worn in battle; that's Kicking Ass in All Her Finery.