Duct Tape for Everything 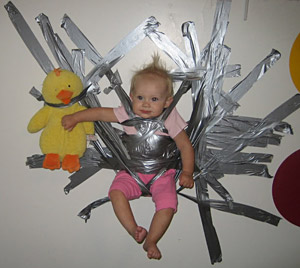 For extreme situations, please use a staple gun.
"Duct tape is not a perfect solution to anything. But with a little creativity, in a pinch, it's an adequate solution to just about everything."
— Jamie Hyneman, MythBusters, "Duct Tape Island"
Advertisement:

This trope is about the versatility, ubiquitousness, and downright usefulness of the substance known as "duct tape". A plastic adhesive tape, usually black, grey or silver in color, originally created to seal ammunition boxes in World War II, but whose usefulness is apparent to anybody who's ever had breakage of any kind that has to be temporarily held together. A military-grade version also exists, known as hundred-mile-an-hour tape in the US, which is even stronger and more adhesive than duct tape, and typically comes in some shade of green or brown.

Common usages in fiction include restraining individuals and jury-rigging... well, everything.

. It degrades and loses its stickiness over time, failing "reliably and catastrophically" when used on ducts. Aluminum tape

or mastic is used instead. It is also banned by some building codes for use on ducts due to the occasional incidence of bursting into flame under high temperature.

The etymology of the word and whether it originated as "duck" tape is unclear, though the best bet is that it was first made out of a type of waterproof canvas called "duck". There is a brand of duct tape called Duck Tape, but it's relatively new, and so named to deliberately capitalize on the joke. Not to be confused with Scotch Tape, although egregious use of duct tape can function as Handwavium. International names include "silver tape" in Latin America, "gum tape" (gamu teepu) in Japan, "roadie tape" and "Jesus tape" (because it performs miracles) in Finland, "American tape" in Spain and Italy, "Panzertape" (armor tape/tank tape) in Germany (military grade, green), and "weave tape" or "silver tape" in Sweden, blue "isolenta" ("insulation tape") in Russia.

In Britain, it can be confused with "gaffernote  also an informal term for a manager or foreman, make of that what you will tape", a closely-related product that is more widely known in Britain — to the point where a lot of the virtues of duct tape are often spoken of by practically-minded Brits as being the virtues of gaffer tape. Gaffer tape differs from duct tape in the composition of both the backing (gaffer tape is made from fabric as opposed to vinyl or other plastics) and the adhesive (gaffer tape is easier to remove without damaging the surface to which it is adhered). As a result, "gaff" is used a lot in the entertainment industry; using duct tape on a film or theatre set where you should have used gaff will get you yelled at by the crew.

Occasionally, super-glue fills this role, but more often it's used in comedic mishaps. Compare and contrast to Painful Adhesive Removal.

Has been examined by the MythBusters.

Alternative Title(s): Handymans Secret Weapon, When In Doubt Duct It