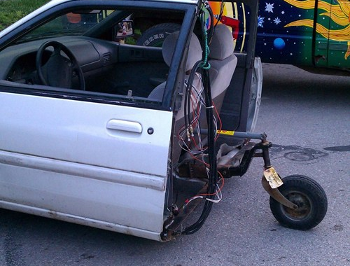 It's an idea that you see often in Sitcoms: whenever a plumber/exterminator/repairman/whatever is needed for something around the house, the father (usually, but not always, a Bumbling Dad) almost always says something along the lines of, "You don't need to call a professional; I'll take care of it." Often, he enlists the help of one of his sons (never a daughter). And Hilarity Ensues as the attempt to economize backfires horribly.

Can result in a D.I.Y. Disaster. For strictly plumbing related projects, see Do-It-Yourself Plumbing Project. Compare and contrast Duct Tape for Everything.