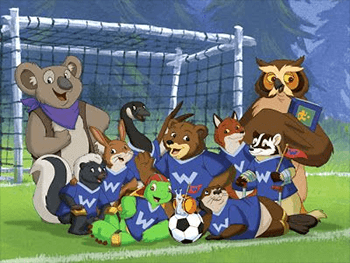 Franklin (Franklin the Turtle) is a Canadian series of children's books written by Paulette Bourgeois and illustrated by Brenda Clark, featuring the adventures of an anthropomorphic young turtle and his group of friends. The first book in the series, Franklin in the Dark, was released in 1986 by Kids Can Press and its popularity led to over twenty books in the original series.

In 1997, the Canadian animation studio Nelvana adapted the characters for an animated children's series with the same name that appeared on Nick Jr. and CBS in the United States, Family Channel and Treehouse TV in Canada, and has since been seen around the world. In each story, Franklin explores themes and values of importance to kids, including the first day of school, a first sleepover and the importance of perseverance and being true to one's friends. The animated series is often deemed as among the best shows created by Nelvana, as well as one of the true icons of Canadian television animation.

the production of a new CGI series, Franklin and Friends, ordered for 26 episodes, featuring familiar favorites and a new character, Aunt T. The series was previewed on Treehouse TV on February 14, 2011 and began regular broadcasts in March. In the United States, it began airing in Nickelodeon's morning block on February 13, 2012, nearly a year after it was first seen in Canada. In September 2013 it also premiered in the UK.

Franklin celebrated its 25th anniversary in 2011. There were a total of four films released for the original Franklin series: Franklin and the Green Knight: The Movie, Franklin's Magic Christmas, Back to School with Franklin and Franklin and the Turtle Lake Treasure. Franklin and Friends has two to date: Polar Explorer and Deep Sea Voyage. Both were made with the participation of the theme park SeaWorld, which also hosts a Franklin attraction at its park in Orlando, Florida.

Two Franklin CD releases are known to be available. The first, Hey, It's Franklin!, was released in 2000 and includes music from the film Franklin and the Green Knight, as well as two different stage shows. The second is called Franklin & the Adventures of the Noble Knights and features the music from a 2010 stage show by that name.

, so if you'd like to make your choice for the best episode of the series known, now's your chance. Nelvana has also made every episode of both the original series and Franklin and Friends available on YouTube through both the show's official channel and Treehouse Direct.

The various adaptations of Franklin provide examples of the following:

Source of the page image. In "Franklin in Charge," when Mr. Turtle goes on a trip, Franklin wants to do all the household chores to prove he can be just as responsible as his father. Unfortunately, he accidentally adds in too much washing powder when doing laundry and ends up upside-down on his shell in overflowing soap bubbles.

Source of the page image. In "Franklin in Charge," when Mr. Turtle goes on a trip, Franklin wants to do all the household chores to prove he can be just as responsible as his father. Unfortunately, he accidentally adds in too much washing powder when doing laundry and ends up upside-down on his shell in overflowing soap bubbles.