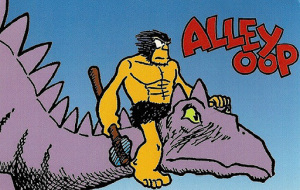 Alley Oop and Dinny
"There's a man in the funny papers we all know
He lives way back a long time ago
He don't eat nothin' but a bearcat stew
Well, this cat's name is-a Alley-Oop."
— The Hollywood Argyles , "Alley-Oop"
Advertisement:

is a long-running Newspaper Comic featuring the adventures of the eponymous caveman and a supporting cast that includes his girlfriend Ooola, his dinosaurnote Yes, we know. Dinny, and his best friend Foozy (who speaks entirely in rhyming couplets).

The series was created by V.T. Hamlin, and debuted in 1932. A major development came in 1937, with a storyline in which Alley Oop and Ooola were accidentally zapped into the 20th century by an experimental time machine invented by one Dr. Elbert Wonmug. Subsequent storylines have involved Alley Oop visting many intervening periods of history.

The comic strip also inspired a novelty song of the same name, which became a #1 hit for the Hollywood Argyles in 1960,note cover versions by Dante and the Evergreens and the Dyno-Sores also reached #15 and #59 respectively and was covered by The Beach Boys for their Party! album in 1965.