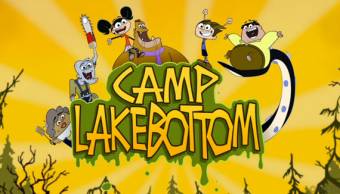 Where the zombies drool, where spooks are cool, and where you shouldn't eat that food!note From left to right: Rosebud, Sawyer, Gretchen, Armand, McGee, Squirt, and Slimey
Advertisement:

Camp Lakebottom is a Canadian animated series produced by 9 Story Media Group that aired on Teletoon in its home country, as well as on Disney XD in the U.S. It was created by Eric Jacobson and Betsy McGowen, and ran for 64 episodes over 3 seasons between 2013 and 2017.

Summer has arrived! That means it's time to for kids to go to summer camp, and ever-eager 12-year-old McGee couldn't be more thrilled to spend his summer at Camp Sunnysmiles, the most elite summer camp in all of Canada — even if he has to spend his time there with his overbearing sister, Suzi. But thanks to Suzi and rich jerk Jordan Buttsquat (whose dad owns Camp Sunnysmiles), he, along with an aloof girl named Gretchen and a big, softhearted goof named Squirt, wind up taking the bus to the creepy, old summer camp across the lake known as Camp Lakebottom. It's a gloomy wreck of a camp, staffed by a friendly zombie named Sawyer, a fancypants sasquatch named Armand, and a short, surly lunchlady named Rosebud. Though spooked at first, the trio find out Camp Lakebottom isn't such a bad place to spend the summer after all, even despite the freaky and supernatural stuff that occurs there regularly. The only thing that stands in the way of these kids, their counsellors, and their summer fun is their rivalry with Buttsquat and Suzi over whose camp is better.