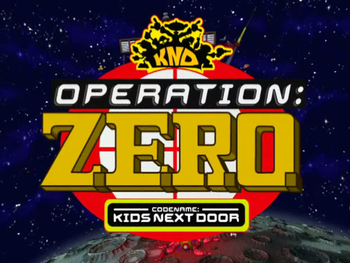 Operation: Z.E.R.O. is The Movie to the cartoon Codename: Kids Next Door.

In this movie, an old evil named Grandfather is recommissioned by his son, Father and takes control of the world. He turns everyone into Senior Citizombies and soon, the KND begins falling apart as one by one, all of its operatives turned into Senior Citizombies... Including Numbuhs 2, 3, 4, 5, 362, 60, and 86...

It looks like Numbuh One is going to have to turn to a hero... A hero named Numbuh Zero...