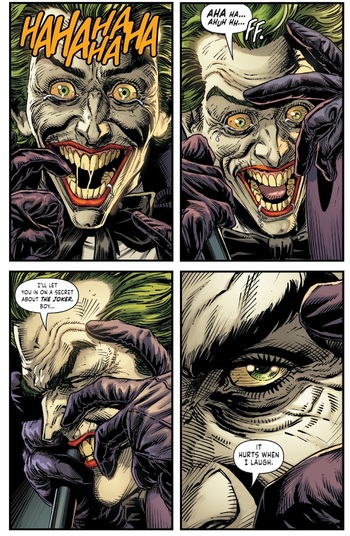 I'm the kind of guy who laughs at a funeral.
Can't understand what I mean? Well, you soon will.
— Barenaked Ladies, "One Week"
Advertisement:

Characters don't just laugh when they find something funny. Laughter is an involuntary response which may arise from any swell of overwhelming emotion — not just humor. During or after the moment, characters may cry as well, as tears are another way for people to react when important events happen that they cannot control.

This can manifest in different ways and convey different meanings:

This trope is Truth in Television, as it is generally theorized that laughter developed as a way for the early humans to release tension and express relief. Therefore people tend to laugh, often times even involuntary, when extremely nervous or stressed. People might also laugh when they are in physical pain.

Compare Technically a Smile, where smiling is not for happiness or friendliness but is the animalistic and predatory act of baring one's teeth. Mirthless Laughter may also be the result of a Laugh with Me! moment.

Not to be confused with Laughing Mad, which is about laughter as a sign of a crumbling psyche.

In which David Mitchell is so merry.

In which David Mitchell is so merry.