I Will Show You X! 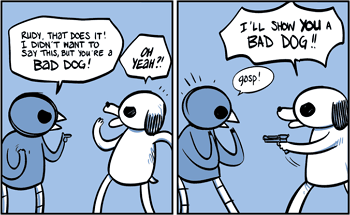 In response to something character A says, character B takes parts X and Y of its wording, and says something along the lines of "I'll [X] You Some [Y]!" or similar variations. It's not so much a Stock Phrase as a stock-structure of phrases. Sometimes for humour there may be a very good word for this structure, but a far less suitable word is used.

When said towards a villain, this may be part of a Shut Up, Hannibal! moment. However, neither using the phrase nor being the subject of the phrase is necessarily associated with moral alignments in either direction. This can vary in effectiveness as a comeback depending on the situation and the words involved, going anywhere from perfectly apt and in-character to painfully clumsy, and at worst, utterly nonsensical.

Compare/Contrast with [Verb] This!, in using someone's own wording in a retort to them, but in this case it's specifically about what the character saying it will do, whereas [Verb] This! has no "I" in it and could just as easily be referring to some external circumstance. Compare No, You. Not to be confused with And Show It to You. Or with pointing out the twenty-fourth letter of the alphabet to someone, or showing them how to understand and solve an algebra problem.

What would Larry do?

SpongeBob is about to see what Larry would do once he takes his advice too far...

Alternative Title(s): I Got Your X Right Here

What would Larry do?

SpongeBob is about to see what Larry would do once he takes his advice too far...