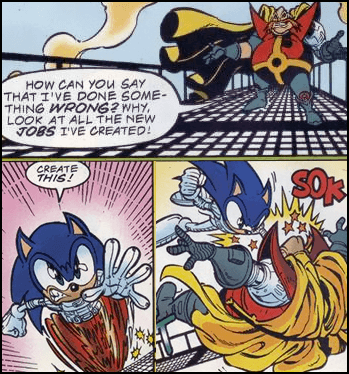 "Dodge this."
— Trinity, The Matrix
Advertisement:

We know this. But it's still a joy to watch.

A bad guy will taunt, cajole, or in some way try to deceive the good guy/s with big words, possibly flowery language, or good ol' fashioned Trash Talk. But the good guy/s will have none of it. Instead, they'll snatch a word out of the enemy's tirade, tack a hard, defiant, "THIS!" to the end of it, and unload on their enemies.

In lowbrow games of Volleying Insults, "this" is one's crotch, indicated with a gesture so the other doesn't miss the point.

Can result in Cluster F-Bomb if the verb happened to be an F Word, or Screw This, I'm Outta Here! here if verb was "Screw".

Compare/Contrast with I Will Show You X!, in using someone's own wording in a retort to them, except that I Will Show You X! is more specifically about what the character saying it will DO, whereas in Verb This there's no "I" in it and it could just as easily be referring to some external circumstance. Also compare/contrast with Oh God, with the Verbing!, where the speaker is expressing exasperation with someone's wording and implying that he's heard it too many times already.

Usually doubles as a "Facing the Bullets" One-Liner, Pre-Mortem One-Liner and/or Pre-Asskicking One-Liner as well. Can be someone's Moment of Awesome if pulled off properly.

Compare I Am the Noun, Shut Up, Hannibal! and Punctuated! For! Emphasis!. Also, Talk to the Fist and I Will Show You X!.

open/close all folders
Anime & Manga This!
Asian Animation This!
Advertisement:
Comic Books This!
The Transformers: More Than Meets the Eye: After cloaking himself and smashing a shot glass over Getaway's head, Mirage says, " Bomp that."
Fan Work This!
Films — Animation This!
Films — Live-Action This!
Literature This!
Live-Action TV This!
Music This!
Newspaper Comics This!
Professional Wrestling This!
Puppet Shows This!
Theater This!
Video Games This!
Webcomics This!
Web Original This!
Western Animation This!
Real Life This!
Trope this!
Feedback