My Friends... and Zoidberg 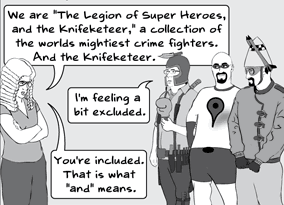 Robot 1-X: How may I help you?
Bender: Save my friends! And Zoidberg!
— Futurama, "Obsoletely Fabulous"
Advertisement:

A standard comedy trope which, at its core, takes the form:

It is often expanded to mention two or more groups that form a supergroup:

In either version, Bob is already expected to be among the group(s) in question, but is singled out as if he's not, usually at Bob's expense; "Bob" can be anyone, including the Butt-Monkey or an Acceptable Target. In extreme cases, the group will be received with cheers, and the name of Bob will be received by Chirping Crickets.

This can be Played for Laughs in cases where it's literally impossible for Bob not to be a member of the groups mentioned.

It can also be used to deliver a Stealth Insult: "We welcome members of all benevolent professions, as well as lawyers." Or, inverted, it can even deliver a compliment: "You morons, and Bob."

Compare: And the Rest, Snub by Omission, Bait-and-Switch Comparison, I Take Offense to That Last One!, Guilt by Association Gag, Ladies and Germs, and Insult to Rocks. Compare and Contrast Especially Zoidberg.

See also The Friend Nobody Likes, which overlaps in casesnote  such as the Trope Namer, Zoidberg from Futurama where this person is singled out because, well, they're the friend no one likes.

Not to be confused with Protagonist and Friends, which despite the name, is unrelated.

Saturdays are made for dads!

Alternative Title(s): And Zoidberg, Ladies And Alice, People And X

Saturdays are made for dads!