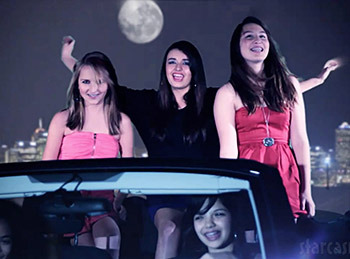 "Friday", performed by Rebecca Black, is a pop song which went viral in March of 2011. The song is about a girl celebrating the fact that it's Friday. And eating cereal. And choosing between the front and back seats of her friends' car when there's only a seat in the back open. And listing the days of the week, before some random guy starts rapping about passing a school bus.

We'd say It Makes Sense in Context, but it doesn't.

Originally the obscure product of a Vanity Studio called ARK Music Factory, the song became viral due to its infectious beat, gratuitous abuse of Auto-Tune that isn't enough to hide a mind-numbingly bland melody, and amusing lyrics, all ARK Music Factory's own fault.

The original video has been taken down from YouTube on June-July 2011 due to a copyright claim by Rebecca Black herself. As of 16 September 2011 (a Friday, appropriately), the video is back on Rebecca Black's Official YouTube Channel

Because the song and its video were effectively the product of ARK Music Factory, both are ultimately just brief blips on the early career of Rebecca Black, who would spend the next decade maturing and developing herself as a mostly independent artist. With her name still being attached to "Friday" by 2021, she released a 10-year anniversary "hyperpop" remix

featuring 3OH!3, Dorian Electra, Big Freedia, and produced by Dylan Brady of 100 gecs. Despite it this time intentionally taking everything obnoxiously poppy about the original track and cranking it up to the max, the remix gained surprisingly positive reception from fans and critics alike, so it appears like she got the last laugh on the matter.

Not to be confused with "Last Friday Night" by Katy Perry, whose video features Black.

Tropes associated with this song:

Tropes associated with the 2021 remix: