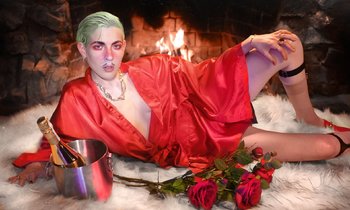 Dorian Electra is an Indie Pop singer, songwriter and performance artist from Houston, Texas, known for their androgynous style, high-concept music videos and Hyperpop songs about gender and sexuality.

Electra first came to prominence in The New '10s with their series of music videos, beginning with the self-produced "I'm in Love with Friedrich Hayek" while attending Shimer College. From there, they made several videos with the website Refinery29, including "Ode to The Clitoris," "Mind Body Problems" and "The History of Vibrators," as well as a series about intersectional feminism with videos like "The Dark History of High Heels" and "2000 Years of Drag," the latter of which would see a successful run at LGBTQ+ film festivals. Almost all of these videos were accompanied by a single.

Their mainstream breakthrough would begin in 2017, when they appeared as a featured vocalist on the Charli XCX song "Femmebot." By this point, Electra had adopted a more distinctly masculine appearance, with a new low-pitched singing style to go along with it. This would become their default appearance for the next two years as they would hype the release of their first full-length album, Flamboyant, which was self-released in 2019 on the back of several reasonably successful singles, including "Daddy Like," "Man To Man," "Adam and Steve" and the title track, all of which were accompanied by their trademark videos. This was followed by a sold-out promotional tour, Flamboyant: Chapter I, from August to December of that year.

A second tour, Flamboyant: Chapter II, was scheduled for 2020, but postponed due to the COVID-19 Pandemic. Nevertheless, Electra would release another full-length album, My Agenda, at the tail end of that year.

Dorian is genderfluid and goes by they/them/their pronouns.