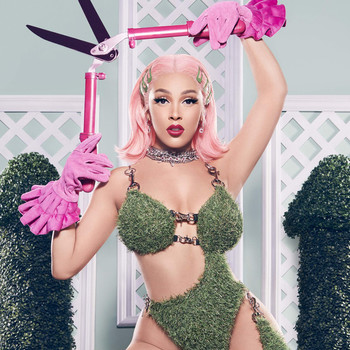 Influences:
You can reciprocate
I got delicious taste, you need a woman's touch in your place
Just protect her and keep her safe
Baby, worship my hips and waist
So feminine with grace
I touch your soul when you hear me say, "Boy"
Let me be your woman
—"Woman"
Advertisement:

Amalaratna Zandile Dlamini (born October 21, 1995), better known by her stage name Doja Cat, is an American singer, rapper, songwriter and record producer from Los Angeles. Doja Cat began her music career in 2014 with her debut EP Purrr!, but it was her 2018 song "Mooo!"

, a joke song about being a cow, that brought her to online fame, with its viral music video that quickly reached meme status. Since then she has released a second album, Hot Pink, which has spawned her biggest hit to date with the disco-influenced "Say So".

Music-wise, Doja Cat mainly dances in between Pop, Contemporary R&B, and Hip-Hop, sometimes even in the same song. However, she has also tapped into other genres, such as Disco with the aforementioned "Say So" and even rock, as she did a rock cover of "Say So"

for the MTV Europe Music Awards.