My Girl Is Not a Slut 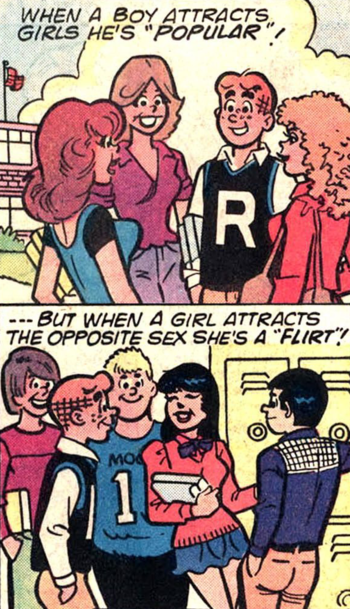 "A man is like a key, a woman is like a lock.
A key that can open every lock is a great key,
but a lock that can be opened by every key is a worthless lock."
— Old proverb
Advertisement:

An omnipresent meta-trope about female sexuality.

For the last few hundred or more years, sexually active men have often been admired for their virility and sexual "conquests" (unless he is a cad, or picking only low hanging fruit)note It's not like things have always been that way for everyone. Culture in Ming Dynasty China, for instance, held that a man was manly either by being a chaste warrior or an incredibly promiscuous and scholarly/cultured pretty-boy. One's life expectancy was supposed to be radically shorter if one was in the latter category, in part because medical science speculated that male ejaculation entailed transferring some of one's finite store of (male) life force to the receiver (which is why male masturbation was avoided by anyone with good sense), but largely because of all the jealous lovers and husbands, not to mention STIs. while a sexually active woman is more likely to be seen as being a trashy whore. For a man, the loss of his virginity is an achievement. For a woman, it is a surrender or, if outside of marriage, a filthy defilement. Before birth control became readily available, this Double Standard probably had something to do with how a man can have hundreds of partners without any discernible consequence (barring STDs), whereas a woman in the same position would most likely be irreversibly changed into a mother forever.

This means that the leading lady will be in a monogamous "meaningful relationship", usually with the leading man, while the leading man will have a varied and adventurous sex life. Anyone knocking the chastity of the hero's girl is even more likely to get punched out than anyone calling the hero a virgin. It could sometimes look like The Hero can womanize happily to his heart's (or other organs') content, but his best girl will still wait for him. This is why Nature Adores a Virgin.

This is Older Than Feudalism, due to the historical sexual Double Standard.