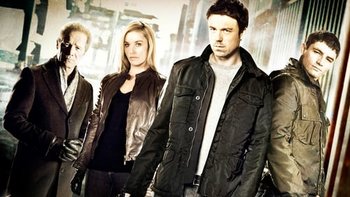 Andrew Buchan plays John Mercer, an ex-soldier serving life for murdering his aunt and uncle after they molested his sister. One day, ex-cop Lenny Douglas visits him and offers him a release from prison...

If he becomes a government-controlled assassin who bumps off people the law can't bring to justice.

So he does, aided by small-time crook Calum — an annoying but loveable sidekick — and Rose, a former policewoman and Lenny's ex-wife.

This is not related to The Fixer trope, or to novel The Fixer.