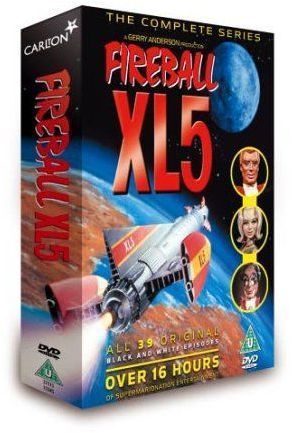 I wish I was a spaceman, the fastest guy alive
I'd fly you 'round the universe in Fireball XL5
Way out in space together, compass of the sky
My heart would be a fireball...
A fireball...
Every time I gazed into your starry eyes...
Advertisement:

Fireball XL5 is a British TV show following the missions of spaceship Fireball XL5, commanded by Colonel Steve Zodiac of the World Space Patrol. The show was made in 1962 by Gerry Anderson, featuring Supermarionation, which would be used again in subsequent shows such as Thunderbirds and Captain Scarlet and the Mysterons — this was the first and to this day only Anderson show to be shown on network television in the US, NBC to be specific (the bastardizations of Thunderbirds briefly shown on Fox Kids in 1994 don't count).

It was also the last Supermarionation show to be made in black and white. However, with Anderson's approval one episode was colorized for the Blu-ray release, suggesting that the rest of the series might get the same treatment if it sells well enough.

The launch of Fireball XL5

The launch of Fireball XL5