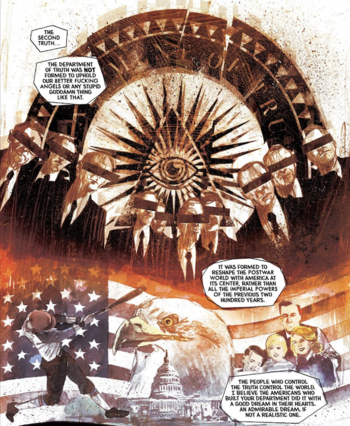 Everything is connected.
Advertisement:

A thriller centered on the conflict between The Protagonist and The Conspiracy, often with an elaborate Conspiracy Theory as the background.

The story starts off with either a minor meaningless crime or a high-profile murder. A person related to the criminal blamed or the uncovered victim notices some odd discrepancies in the official story and digs deeper. Before the protagonist(s) realize(s) it, they are caught in a multi-layered plot that involves possibly EVERYONE, especially those who are tasked with the official investigation... meaning that the hero/heroine can't go to the cops... or the press... or that janitor in the hallway they just passed who looks a little too much like the guy who'd been shadowing them the last day or so...

There may be some overlap between this genre and Spy Fiction, as they both tend to revolve around people who work for (or have close encounters with) secretive organizations pursuing their own political agendas. Also see So You Want to Write a Conspiracy Theory, for those interested in writing their own Conspiracy Thriller.

Examples of conspiracy thrillers include: