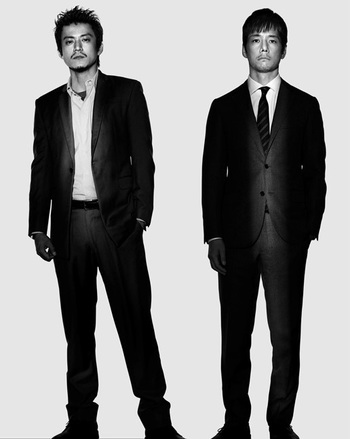 Crisis, also known as CRISIS: 公安機動捜査隊特捜班 (CRISIS: Koan Kido Sosatai Tokusohan or CRISIS: Public Security Mobile Investigation Unit Special Investigation Team) and as CRISIS - Special Security Squad - outside Japan is a 10-episode Japanese drama series that aired in Japan from April 11 - June 13, 2017. It's broadcasted by Kansai Television and by Fuji Television, the latter being also available under Fuji TV's "Fuji TV on Demand" online network and on Amazon Japan on a rental basis. The show is based on a script written by Kazuki Kaneshiro, who was involved in SP: Security Police and the BORDER series. The OP song is "I need your love" by Beverly, while the show's soundtrack was scored by Kohta Yamamoto and Hiroyuki Sawano.

It made history as the first Japanese television show to be aired first in Cannes at the MIPTV festival on April 4, 2017. At the same time, Indonesia, Myanmar, Singapore, Taiwan, Sri Lanka and Mongolia has acquired the rights to broadcast the show in their local networks via WAKUWAKU Japan with the appropriate subtitles made available. CRISIS also achieved the rating of 18.4％ percent, the highest audience ratings throughout the Kansai area for the Spring 2017 season.

The show takes place in Tokyo in the year 2017 where the National Police Agency has established a covert plainclothes law enforcement unit called the Public Security Mobile Investigation Unit Special Investigation Teamnote Kansai TV calls them the Special Security Squad in its English literature, a team made of five active police officers who served in various capacities in the Tokyo Metropolitan Police Department under the command of Superintendent Daiki Kaji, head of the NPA's Security Bureau, alongside Tokyo Metropolitan Police Department Superintendent Yuko Aonuma. Each of the officers carries/carried a Dark and Troubled Past with them. Their job is to investigate and solve criminal and terrorist cases throughout the country when the deployment of conventional law enforcement units may attract unnecessary and unwanted attention from the public eye, especially if the matter at hand is serious, sensitive or a black ops-type mission.

The show is officially optioned by KTV for a foreign remake. The official English website is here

has more information on the show's plot and characters. The official English website from Fuji TV is also available here

In November 2017, the show won the Excellent Prize category in the 2017 Tokyo Drama Awards event.

In March 2018, the show won the Silver Plaque award at the 54th Chicago International Television Festival.

Tropes present in the show: