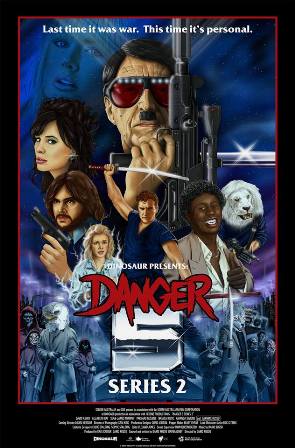 "What the wallaby are those dinosaurs doing with Hitler? I mean, none of this makes any sense!"
— Tucker
Advertisement:

Ever imagined what would have happened if an international team of secret agents had fought Adolf Hitler in the 1960s? If not, that's no surprise, but David Ashby and Dario Russo somehow dreamed up this eccentric premise and went crazy with it. Series 2 switches things up by putting the action in the '80s.

Developed by the creators of Italian Spiderman, Danger 5 is an oddly compelling action/comedy set in a bizarre Alternate Universe based on cheesy old TV and pulp fiction cliches. It features the Danger 5 team directly assigned to thwart Hitler's diabolical plans, which involve anything and everything from Japanese robots to Nazi-controlled dinosaurs.

Danger 5 began with a short series of Webisodes, followed by a 2 season television series broadcast on its parent network SBS, with an eight episode audio drama season released as an Audible original in 2020.