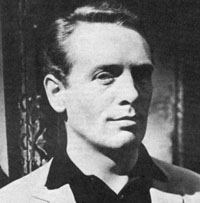 They've given him a number. He will be angry later on.
"Every government has its secret service branch. America, CIA; France, Deuxième Bureau; England, MI5. NATO also has its own. A messy job? Well that's when they usually call on me or someone like me. Oh yes, my name is Drake, John Drake."
— First season Opening Narration

Danger Man (known internationally as Secret Agent) was a British down-to-earth spy series made in The '60s. Launched in 1960, originally it was going to bring none other than James Bond to the small screen and Ian Fleming was involved at early stages. However since the rights for Bond movies had been sold, Danger Man was changed into something quite different. It features a superagent named John Drake, played by Patrick McGoohan - also once a candidate to play Bond in the films - who doesn't like gunplay or violence and generally has morals way too strong to make him comfortable in his job. His gadgets and enemies are also rooted in reality.

Danger Man ran for 86 episodes spread across four seasons of uneven length. The first season aired in half-hour installments in both the UK and on CBS in the US in 1960-61. In this version, Drake is an Irish-American agent working for NATO on jobs considered "too messy" for organizations such as the CIA. Lack of interest by CBS in further episodes resulted in its cancellation and McGoohan went on to sign a contract with Disney. In 1964, with the rise of Bondmania, a rebooted Danger Man series was launched in the UK; in this version, now running in higher-budgeted hour-long episodes, Drake is a British agent working for a secret agency called M9, though otherwise the character and storytelling remained the same as before. For US broadcast, the series was retitled Secret Agent (and given a new theme song, Johnny Rivers' "Secret Agent Man", that became iconic).

Season 4 was supposed to start the show's transition into colour, but after completing only two episodes, McGoohan convinced the studio to cancel the series, so that he could instead produce a new series, The Prisoner, which is at least a Spiritual Successor and maybe even an outright continuation, depending on what you choose to believe. (Those last two episodes eventually aired on their own in the UK during a broadcast break for The Prisoner, and in the US edited together into a TV movie entitled Koroshi.)

Not to be confused with Secret Agent Man, a short-lived spy show that aired on UPN in 2000 that used the same theme song as the US version of Secret Agent but otherwise had no connection to the McGoohan series. (Some reference books and websites erroneously label it a remake.)