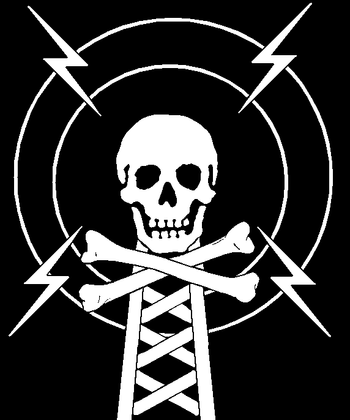 "Arrrrgh!!! You're listening to Blackbeard in the Morrrrning, mateys!"
Advertisement:

Pirate radio is as old as government regulation of radio broadcasts. It gets its name from the fact that many early unlicensed radio stations, especially in Europe, were based on boats, such as the famous Radio Caroline off the coast of Britain in The '60s. Since then, the term has been applied to any radio station that operates without a government license. This usually annoys government regulators, licensed radio stations and radio listeners alike, as pirate radio stations operating on a close enough frequency to licensed ones can cause interference that screws with radio reception (this is basically how radio jamming

Pirate radio often captures people's imaginations because it symbolizes resistance to the powers that control popular music or access to information. To use the Radio Caroline example again, it shot to popularity in the swinging '60s (as did Radio Luxembourg) because British listeners were fed up with the BBC's control of what music was played on the radio,note If the lyrics contained a trademarked word, it was automatically rejected leading to the establishment of commercial radio in The '70s. Pirate radio is often portrayed as the Voice of the Resistance, if not against the government, then against the conformity of mainstream popular culture.

A New Media example of pirate radio occurs with internet radio stations that, while not requiring a license to broadcast, play copyrighted music without paying license fees to the record companies. Unlike pirate radio stations, so-called "studio pirates" generally (although not always) fly under the radar of the authorities and the record companies, since an internet broadcast doesn't interfere with over-the-air radio or television signals.