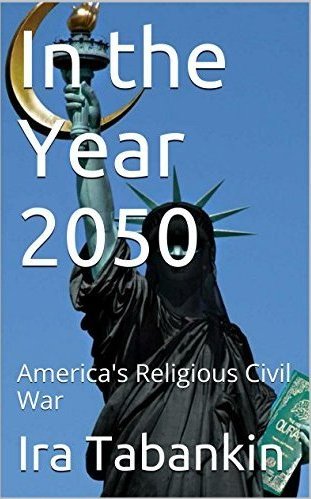 Subtlety, thy name is Tabankin.
Advertisement:

This shows the world of 2050, a Bad Future wherein shifting demographics have lead to a majority Muslim America, and every secular European Government has already been overthrown and merged into the European Caliphate. Now it seems to be America's turn as President Osama bin Muhammad (sometimes spelled 'Mohmand' for no apparent reason) is elected the first Muslim President of the US, and immediately moves to ban consumption of pork products, make all American foods Halal, institute a religious police force to enforce Sharia law, seal the borders, deport all (non-Muslim) immigrants, and tax all non-Muslims.

But not all hope is lost, as outgoing President Jackson sees the new President for what he is, and forms a growing resistance movement from the day he leaves office, one swelled as other religious and ethnic groups in America set aside their differences to fight in the new Civil War.

Tabankin takes a certain pride in being politically incorrect, and this is not his first (or even his fifth) novel about a future civil war in America where the heroes are all square-jawed, conservative, and most probably white, men. And that's all we need say about that.