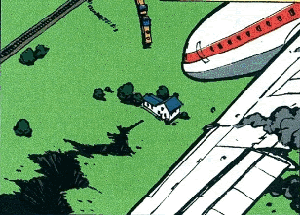 The house has a gas leak, too.
"I don't mean to spoil the moment, but has anyone else noticed that we're stranded in the middle of the ocean on this couch? I mean, it's not as if a big giant ship is going to come out of nowhere and save us– MY GOSH!!"
— Batman, The LEGO Movie, when Metalbeard's ship does just that

In order to keep a story moving, things need to happen a certain way. Sometimes everything is carefully set up and orchestrated, so that events unfold in an organic, natural fashion. More often than not, though, things happen the way they do simply Because Destiny Says So.

Contrived Coincidence describes a highly improbable occurrence in a story which is required by the plot, but which has absolutely no outward justification — not so much as a character saying There Are No Coincidences. The concept of "destiny" is glossed over altogether, and the events in question are simply disguised as mere happenstance. This would be jarring, but most of the time no attention is drawn to the event at all. It's just a narrative convention designed to skip over lots of irrelevant stuff by putting the important events all together, leaving the audience to forget the improbability of the event.

Contrived Coincidence is one of the driving forces of Farce, decreed by the Rule of Funny. This is a major reason why wariness is needed in other genres; too much of it will make the story farcical.

Make note that like its sister trope Theory of Narrative Causality, this is one of the most pervasive tropes out there. Remember though, that just because a work uses this trope is not an automatic black mark against it. Even the greatest works out there sometimes need a great leap to get the plot to go in an interesting direction.

Too many contrived coincidences may result in One Degree of Separation. For a more grandiose or plot-wrapping version, see Deus ex Machina. A person who is a Weirdness Magnet tends to be a walking contrived coincidence. Often, these can disguise a Gambit Roulette as The Plan. If the story's premise is this trope or relies on it, it's It Began with a Twist of Fate instead. Framing the Guilty Party invokes this trope when the one doing the framing didn't know that party was already guilty.

Super-Trope to Coincidental Broadcast and It's a Small World After All.

Compare with Doom Magnet. See also Fridge Logic (or Not My Driver), for the moment the character realizes this trope.

Even lampshaded. After Miss Piggy's stolen truck runs out of gas, she finds herself in need of a vehicle. As luck would have it, a stunt team vehicle passes by and drops a perfectly sized motorcycle right at Miss Piggy's feet.

Even lampshaded. After Miss Piggy's stolen truck runs out of gas, she finds herself in need of a vehicle. As luck would have it, a stunt team vehicle passes by and drops a perfectly sized motorcycle right at Miss Piggy's feet.