Ride / The Amazing Adventures of Spider-Man 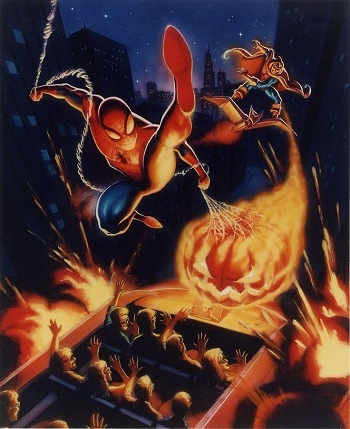 With Doc Ock on the loose, this could be the most dangerous night of my life! And YOURS!
— Spider-Man
Advertisement:

The Amazing Adventures of Spider-Man is a 3D dark ride at Universal's Islands of Adventure and Universal Studios Japan. The ride follows Spider-Man and his battle against the evil Sinister Syndicate, led by Doctor Octopus himself. The designs of the ride take inspiration from Spider-Man: The Animated Series, mainly from the characters that share an appearance between the show and this.

The attraction has guests enter and queue through the Daily Bugle, where television monitors overhead show news footage of the Syndicate wreaking havoc throughout the city, with authorities as being completely overwhelmed. The footage also reveals that the Syndicate has stolen the Statue of Liberty, which they obtained by levitating it into the air, via a special weapon that Doc Ock had acquired. With the Statue of Liberty hostage, the Syndicate broadcasts that they will only place it back if the entire city surrenders to them. J. Jonah Jameson, seeing a newspaper-selling advantage in all of the turmoil, yet having no photographers to spare, sends the guests out in the Daily Bugle's new "SCOOP" vehicles to take pictures of what's going on. From there, things get rather...chaotic, to say the least.

The attraction's history began after Universal acquired the license to use the Marvel Comics characters for their new park, Islands of Adventure, after failing to acquire the DC Comics characters as they had originally wanted. With a Marvel-themed "island" now on the drawing boards, it was quickly decided that Spider-Man, being Marvel's best-known character, should be the headliner attraction.

When designing the attraction, the creative teams sought inspiration from two earlier attractions: Back to the Future: The Ride and Terminator 2 3-D: Battle Across Time. The plan would be for this attraction to combine the former's thrilling simulations with the latter's seamless integration of 3-D film with real-life sets - and in addition have this all take place on a moving vehicle. The big problem with this plan was the fact that 3-D only looks good if viewed from at the center; at a different angle, it comes off as looking completely distorted. To get around this, the creative team had to flat-out develop a whole new process which they referred to as "squinching" - having the 3-D film "move" with the location of the ride vehicle. note If you're confused right now, don't be ashamed. Since the process had never been done before, the creative team was repeatedly told that there was no way it would be possible - but luckily they managed to prove all doubters wrong (click here

for more information about this whole process) The attraction also required a very-much elaborate type of ride system in order to have the vehicles be on top of a mobile simulation-base. All of these technical hurdles ended up sending the attraction extremely over-budget; which unfortunately resulted in many of the planned additions of the new park being slashed from the budget.

After years of design and planning, the ride opened with Islands of Adventure on May 28, 1999. Upon opening, the attraction was an immediate success, leaving virtually everyone stepping off the ride mind-blown at how it was done. Its insta-popularity led to lines going on for hours, which even today can still occur. It also won several theme park awards, notably winning the "Golden Ticket Award for Best Dark Ride" for twelve years in a row. The ride continues to receive serious praise from both the industry and theme park enthusiasts, with it often being ranked as one of the greatest theme park attractions of all time.

The ride was eventually cloned at Universal Studios Japan, opening on January 23, 2004. Its opening caused a massive spike in attendance for the park, with it going from 8.8 million to 9.9 million visitors in just under a year.

In 2012, the ride was given an extensive overhaul; its film being completely re-animated and put into 4K high-definition along with it receiving a new digital projection system and a new soundtrack. The new additions were very well received, with people regarding the ride as being "better than ever."

The Amazing Adventures of Spider-Man provides examples of the following tropes: