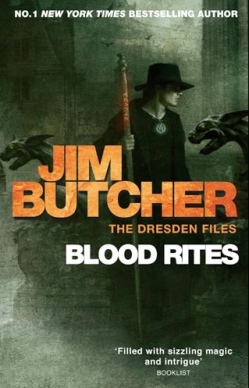 The One With… sex monsters. And puppy Mouse.

Blood Rites is book #6 in The Dresden Files. Not to be confused with the gory exploitation flick of the same name.

"Harry."
I stopped. His (Thomas's) voice was raw with emotion, and sounded like he was trying to speak through a throat full of bitter mud. "I wanted you to know. Justine... I tried to stop in time. I didn't want to hurt her. Never."
"Yeah." I said. "You had good intentions. That makes it all right."
He folded his arms over his stomach, as if nauseous, and bowed his head. His long hair veiled his face. "I never pretended I wasn't... a predator, Harry. I never claimed she was anything but what she was. Food. You knew it. She knew it. I didn't lie to anyone."
I had a bunch of vicious answers I could have gone with, but I went with "Before she went to you last night, Justine asked me to tell you that she loved you."
Short of shoving a running chainsaw into Thomas's guts, I don't think I could have hurt him any more.