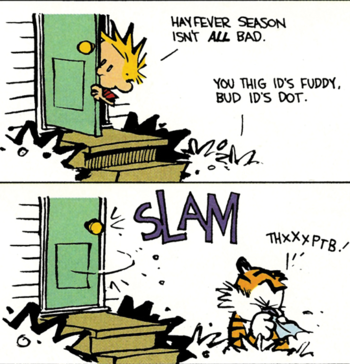 "I don't feel berry good. I thing I'm coming down with a coad."
— Lizzie Bruin and Papa Bear, The Berenstain Bears, "Come Clean for School"
Advertisement:

Being congested is a pain in the butt— you have trouble breathing through your nose, your sinuses hurt (and if it's caused by a nosebleed, that whole area hurts), and your voice can even sound different due to the blocked airway. In written fiction, this voice change is often showcased via changing certain consonants, perhaps to the point of rendering the victim The Unintelligible. Common ones include:

Sometimes, this is invoked by holding one's nose to disguise one's voice. If Played for Laughs, it might lead to a Who's on First? type misunderstanding or Accidental Misnaming if they can't pronounce someone's name.

If done well, this can be an effective way to demonstrate that a character has a stuffy nose, but if done badly, it can make the dialogue hard to read, especially if the resulting spelling becomes a word in its own right (such as "cold" to "code").