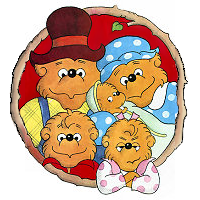 Do we have to call them the "modern Wood Age family"?
"When you're reading this page
Don't get up your hopes
For even these bears
Cannot help but use tropes."
A TV Tropes related example of the little poems that are found at the beginning of the Berenstain Bear Books
Advertisement:

The Berenstain Bears is a long-running children's book series created by Stan and Jan Berenstain (hey, that rhymes!) in 1962. It centers on a family of bears composed of Mama and Papa Bear, and their children, Brother (formerly Small), Sister, and Honey Bear. Yes, those are their real names. It started out as series of simple picture books in the line of Dr. Seuss, but soon evolved into a series of story picture books for children. Starting in 1993, the Berenstains (that's the authors) began writing Big Chapter Books, which put the characters into more serious situations in much longer (but still kid-oriented) books. The picture books have also taken several formats as well, ranging from small hardcovers written in rhyme, to square picture books. Almost all of the books take the title "The Berenstain Bears and __________"

Note that the name is spelled Berenstain. Spelling it Berenstein is a very common error, to the point that even official materials have (mis)spelled it that way occasionally.

There were also several Animated Adaptations over time: Christmas Tree, Meet Bigpaw, Easter Surprise, Valentine Special and Littlest Leaguer (also called Play Ball), all of which aired on NBC. A TV series (The Berenstain Bears Show) aired on CBS between 1985 and 1986, and a second began in 2002 on Teletoon and PBSKids. The 1980s cartoon was an International Coproduction between the American and Australian Hanna-Barbera units and Aussie's Southern Star (originally a subsidiary of H-B AU prior to the end of The '80s, later folded into Endemol); the PBS series was produced by Canada's Nelvana. Nelvana also previously held the rights to the older CBS series after Southern Star was folded into Endemol.

from Narnia company Walden Media and Night at the Museum's Shawn Levy was in the works, although nothing came out after its announcement, and this announcement

confirmed that the film was "still in the script phase".

, thanks to Nelvana's Treehouse Direct channel and the complete series was also made available on DVD for those who prefer that format. PBS still releases some episodes of the show on DVDs and continues to exclusively distribute the series in the US as of today.

With Stan's death in 2005 and Jan's in 2012, their son Mike Berenstain continues to write more Berenstain Bears books for them to share with everyone else around the world.

The main series and cartoons feature examples of the following:

YouTuber Seventeen explains why so many people misremember the title as The Berenstein Bears.

YouTuber Seventeen explains why so many people misremember the title as The Berenstein Bears.