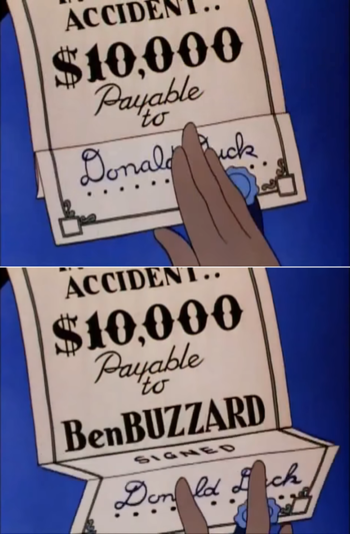 You've got an important document you need signed, but the mark will refuse if you tell them what it is. What to do?
Advertisement:

You lie to them about what it is, or disguise it among more innocuous papers and hand it to them while they're busy and distracted.

It should be noted that Common Law provides certain protections against being tricked when entering an agreement. Countries whose legal systems are based on common law, such as the USA, UK, and Canada, will generally carry over these same protections. It's usually safe to presume a common-law jurisdiction will not hold an individual to a contract if it can be proven that someone lied about the content of the contract, the signer lacked the ability to understand it, for example if their grasp of the language the contract was written in is too weak to fully comprehend the contract, or if someone signed the contract under duress or when too rushed to have time to actually read it.

It's not uncommon to common law jurisdictions to provide further protections against malicious contracts. For instance if a contract was clearly written in a manner to obfuscate part of the contract, such as via excessively small print that signer may not be held to that section. Similarly if a section of a contract is so blatantly one sided that it's clear the signer would not have agreed to it if they were aware of it that section may be excluded. So, for example, just because you slip a paragraph into your rental agreement saying the signer will give you all their worldly possessions and agrees to become your slave doesn't necessarily mean the courts will enforce it. Of course the exact laws and degree of protection offered vary between jurisdictions, so it's best to read any contract closely just in case.

Compare Read the Fine Print, where the person knows they are signing a contract, but do not or cannot read all of the clauses.