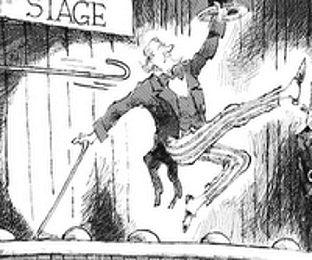 Even a Large Ham can be cured.note Image by Cam Cardow for The Ottawa Citizen
"I am what I am
I am my own special creation
So come take a look
Give me the hook or the ovation"
— La Cage aux folles
Advertisement:

Real Vaudeville shows would Drop the Cow on bad or overly long acts with "the hook", a curtain hook extended from offstage to pull away the performer. Oftentimes by the neck. But in cartoons, you don't even need to be on a stage to get the hook. Any bad performance can get the hook, even if you're performing on top of a fence — it just reaches out from Behind the Black and drags you offscreen. Wearing a red-and-white vertically striped shirt and a straw boater makes you especially susceptible to this, as does dancing while holding a cane. Spending a while dodging the hook, continuing to perform all the while, before eventually getting snared is a common feature.

The real purpose of these hooks was to pull back the curtains at the start of the show in older theaters. Presumably, theatergoers at the time knew what they were for, making it that much funnier to see them being used to yank bad performers off the stage. As theater technology evolved, the hooks' original use has been forgotten over time and nowadays they're much better-known for their use in comedy.

Though he didn't originate it, the hook is forever associated with Howard "Sandman" Sims, a tap dancer who would use the hook on bad acts at the Apollo Theatre. After his passing, other dancers took up the "Sandman" name; sometimes instead of using the hook, they would dance onstage and escort the performer off.

The Turkey of Seville

The Turkey of Seville