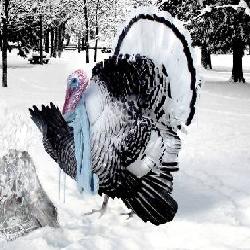 Somehow, I don't think this is what they meant.
"Thirty six hours, groanin' in pain
Prayin' to someone, free me again
Oh, I'll be a good boy, please make me well
I promise you anything, get me out of this hell
Cold turkey has got me on the run."
— John Lennon, "Cold Turkey"
Advertisement:

In Real Life, recovering from a drug addiction is a complicated process, and none of it is fun. Addiction to most forms of drugs involves a physical dependency that develops over time, so lowering your intake of the drug will cause painful withdrawal symptoms that can even become life-threatening in some circumstances. The phrase "cold turkey" derives from the clammy and goosebumped skin of an addict in the grips of withdrawal. But even once your body no longer relies on the drug to function, psychological addiction typically lasts a lifetime, and recovery is an ongoing process that never truly ends. Even after lengthy periods of sobriety, relapses can occur.

In fiction, however, people routinely overcome their substance habit by going through a single self-imposed (and often painful) withdrawal phase, after which they are no longer addicted. This often involve throwing the drugs in the trash or down the drain and then locking oneself up in a room to endure the withdrawal before emerging a new man. Friends may be enlisted to ensure the process proceeds to its conclusion.

See also Cold Turkeys Are Everywhere and Off the Wagon.