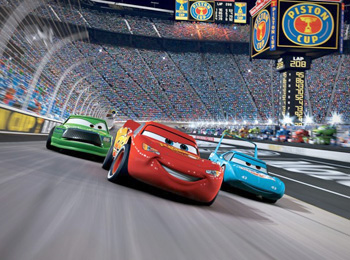 Red things just seem to go faster. In fiction, make something vermilion and you can almost guarantee it'll move quicker, as if the color itself reduces drag, lowers inertia and increases forward momentum. A visual shorthand for getting the point across that an object is zippy.

and feelings of excitement or intensity,

which can certainly give the appearance that a red object is moving faster, as well as possibly encourage the drivers of red vehicles to push the envelope more. Also, the Doppler Effect

makes things red-shifted if they're moving away from you at a high speed (read: significant fraction of the speed of light). Don't expect there to be any evolutionary basis for this, however, as it's unlikely any human would ever get to see it with the naked eye. Additionally, red in fiction tends to be associated with elements/powers that go well with energy and thus speed, like fire and lightning.

Not at all related to Red Herring or Red Shirt. Hot Paint Job (basically "things with flames painted on them go faster") may be considered a sister trope, as red and fire are of course associated.

Sub-Trope of Law of Chromatic Superiority and Color-Coded for Your Convenience. Compare Gold-Colored Superiority for another color that is considered greater than others (sometimes even red).

Red paint makes Mario go faster and even speeds up the music.

Red paint makes Mario go faster and even speeds up the music.