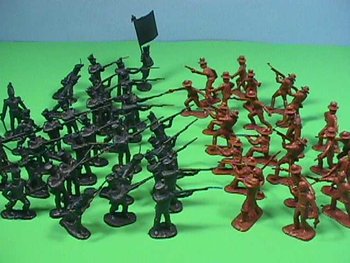 Sarge: They must be trying to coax the bomb into rearming!
Grif: Wait, why would they do that?
Sarge: Because they're blue!
— Red vs. Blue
Advertisement:

In Strategy Games, when a player gazes at the map, it's convenient to know exactly which of the units are yours, which are the enemy's, and which may be unaligned. In order to make this easy for the player, units will be color-coded so that the player can tell at a glance.

Although this can be Justified by military uniforms, this can often apply even to units that are not members of a military force or haven't joined your (or the enemy's) side yet. In fact, an astute player may be able to tell a future ally or enemy by the color of their clothing, before they utter a single line or take any actions.

In single-player games, the side controlled by the player will be a "good" or "heroic" color, while the enemy side will be an "evil" color. Most commonly, these colors will be blue and red, respectively. (Green and red is usually avoided as it's the most common form of color blindness.) Although if there are more than two factions, green and yellow are usually the next colors to show up. This tradition goes back to the early 19th century when members of the newly founded Prussian Military Academy developed Kriegsspiel, the first tabletop wargame and predecessor of all modern RTS and turn based strategy video games. And since the Prussian Army had just adopted the new uniforms in Prussian Blue, blue became the default color for allied troops and red the color of enemy troops, which may even have established the modern Good Colors, Evil Colors.

This effect may be accomplished by a Palette Swap in two-dimensional games, but not always. It's also just as common in three-dimensional games. The colored units can be shown on an Enemy-Detecting Radar.

There are generally 4 versions of this:

Subtrope of Colour-Coded for Your Convenience. See also Color-Coded Multiplayer.