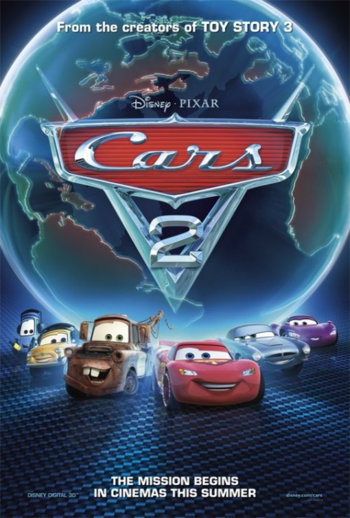 When You're In Over Your Headlights,
Who Do You Trust?
Advertisement:

Cars 2 is the Actionized Sequel to Cars, released in June 2011, and the first Pixar sequel to a movie other than Toy Story.

Oil Baron-turned-electric-vehicle Sir Miles Axlerod has discovered Allinol, a new clean alternative fuel source. To promote it, he creates and sponsors the first ever World Grand Prix, where the best racers compete to see who's the fastest car in the world. One of the finalists is Piston Cup winner Lightning McQueen, who brings along his friends from Radiator Springs as his pit crew, along with first-time team member Tow Mater.

Unfortunately, when an intelligence exchange goes awry, Mater gets mistaken for a master American spy. When he accidentally screws up Lightning McQueen's competition against Formula One racecar Francesco Bernoulli, Mater ends up getting recruited by British espionage agents Finn McMissile and Holly Shiftwell to help them stop the machinations of a lemon car crime syndicate led by international weapons developer Professor Zundapp and his enigmatic boss, the Lemon Kingpin, who want to sabotage the World Grand Prix and Allinol so that they can eliminate this threat to their monopoly on fuel. Now, while McQueen struggles against his guilt, Mater must balance his duty to save the world and his efforts to save McQueen, who is quickly being targeted...