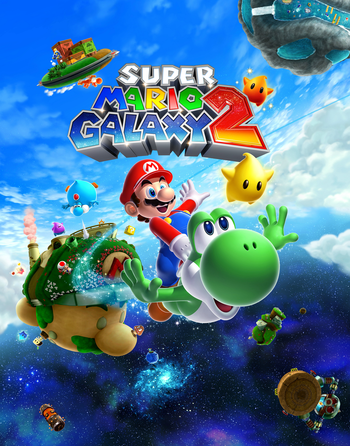 Launch into a new adventure!
"Shining stardust falls on the Mushroom Kingdom once every hundred years. That time had come again..."
Advertisement:

A sequel to the original Super Mario Galaxy, Super Mario Galaxy 2 was released in May 2010, two and a half years after its predecessor. Like the previous game, Mario goes into space once again on a quest to rescue Princess Peach from a building-sized Bowser, who once again plans on creating an evil galactic empire at the center of the universe. Riding on a spaceship-planetoid built in Mario's likeness, Mario must once again save the universe. Also, Mario's brother Luigi and their buddy Yoshi tag along for the ride.

Like Super Mario Galaxy, this sequel features both 2D and 3D platforming, as well as gravity-related challenges as the mustached one careens through the cosmos. It's much more challenging than the original; Shigeru Miyamoto has stated that the game is geared toward players who felt the previous game lacked challenge.

This game was re-released as a digital download on the Wii U's eShop on January 14, 2015.

Example of:
In Case of Boss Fight, Break Glass