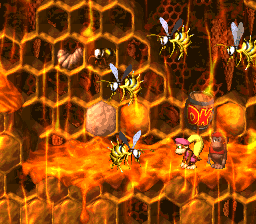 The difficulty here can really sting at times.
Advertisement:

A level seen in video games that takes place almost exclusively inside a beehive. Due to the nature of this level, it is in the realm almost exclusively of Platform Games. It has sticky honey or beeswax that will get stuck on characters and will often have a mazelike level design. There will be a Queen or King bee that needs to be fought. Of course, this videogame setting isn't limited to bees. Wasps, hornets and other suitably annoying flying, stinging insects can have their homes invaded by intrepid heroes as well. Since this level is full of enemy types that usually can't be defeated by traditional means, it can easily become That One Level.

Related tropes that can be seen in this type of level are Scary Stinging Swarm, Hive Mind, Synchronized Swarming, Wicked Wasps, Bee-Bee Gun and Bee Afraid. NPCs or friendly characters will often be Virtuous Bees.