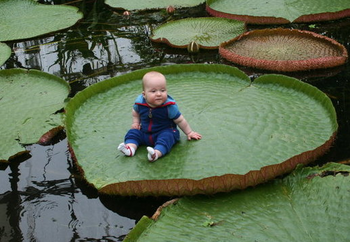 If there's a body of water that needs to be crossed, some lily pads are useful in traversing it. Even if the lily pads in question aren't big enough for a human to sit on, they may be used as platforms by small animals— in particular, this is a Stock Animal Behavior for frogs.

Mario jumps across the lilypads.

Mario jumps across the lilypads.