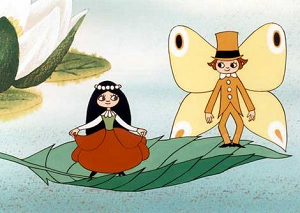 In a show that has Talking Animals or Funny Animals, with the animal characters mainly being mice, birds, lizards, insects, etc., sometimes you can expect there to be a body of water like rivers, lakes or ponds as the setting. The best way for these animals to have transportation is to use a leaf as a boat in order to travel from place to place.

Put bluntly, this is a trope in which an animal character will use a leaf as a boat. It can also be used in fairy tales as well as being a common motif in any tale or art to do with little people like the fey/fairies.

If the traveller is a tiny fairy or a Living Toy, the boat can be powered by cute little animals like butterflies, small birds or fish.