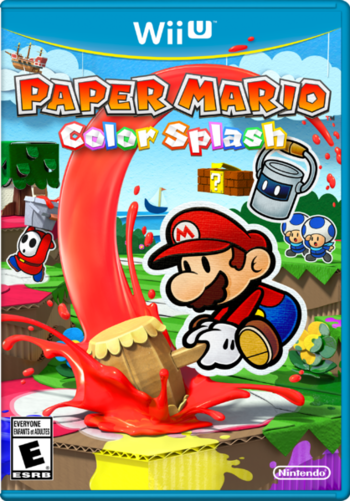 The fifth game in the Paper Mario subseries, officially released for the Wii U on October 7th, 2016 (though it was accidentally released early on September 22nd, 2016, thanks to an error with eShop's prepurchasing). Color Splash began development at the same time Paper Mario: Sticker Star was finished.

One dark and stormy night, Peach and Toad show up at Mario's house and present to him a Toad that was drained of his color, with a postmark indicating it was mailed from Prism Island. The trio go there by boat to solve the mystery, only to find the island, and many of its native Toads, drained of their color as well. Using the help of a bucket-like creature named Huey and a magical Paint Hammer, Mario sets out to restore color to Prism Island and find out who's behind the crisis.

Rather than selecting an attack to use from a menu, players collect cards from around the world to fight enemies with. Cards may be painted before use, and how much a card is painted determines its strength — at the cost of some of your paint, making battles more puzzle-like. Real-world items, or "Things", return from the previous game, but can now be instantly turned into cards. Enemy cards also let Mario summon friendly enemies to fight alongside him.